Polar grids are a key feature of our planetary structure.  There are two sets of planetary poles in play:

The geographic poles are key.  These are defined by the axis of rotation, which establishes well defined north and south poles.  The next major feature is the equator.  This is defined by where the plane through earth’s centre, perpendicular to the axis, meets the surface.  It’s equidistant between the poles.  The space between the equator and the poles is then sub-divided at regular intervals, with parallels of Latitude.

Once a pole position is defined, this establishes the grid.  The other pole is on the opposite side of the planet.  The equator is mid-way between these, and the parallels of Latitude are evenly spaced between them.  Conversely, if an equator is established, this also defines the grid.  It only takes two points on an equator to define it.  It’s centre is already established at the planetary centre and 3 points are sufficient to define a circle on the earth.

The lines or Meridians of Longitude connecting between the poles are less well defined.  There’s no physical (3D) reason to choose one reference Meridian over another.  The Parallels of Latitude are directly associated with geometry and the height of the sun or reference stars in the sky.  With uniform planetary rotation, the sun and stars pass equally over all Meridians on a daily basis, with no preferred starting position.  The Meridians are separated by time, as the planet rotates by the sun.  This gives us the conventional 24 time zones distributed around the planet, corresponding to the hours in a day.

The choice of a Prime Meridian, where we establish a reference clock, is down to convention.  It’s largely a matter of practicality, convenience and politics.  The present Prime Meridian is defined at Greenwich in UK.  This is associated with Greenwich Mean Time, which forms the basis for UTC universal standard time for the planet at present.

There have been other Prime Meridians in the past.  More particularly, in earlier times, Giza Egypt was regarded as a ‘centre for the earth’.  This is an important reference point for earlier Prime Meridians.

The order of significance for alignment with specific grids is then established by correspondence with:

Many thanks to ASaN Deane for recommending the following very interesting book – ‘Atlantis Blueprint’ by Colin Wilson and Rand Flem-Ath.  This provides references for possible former pole positions in Yukon and Hudson Bay, Canada.

The present polar grid is illustrated, overlaid on  Google Earth mapping, in the diagram over.  Grid lines are drawn at 10⁰ intervals, with 30⁰ lines in bold.  The Prime Meridian is through Greenwich.

This polar grid can be rotated to other polar positions.  Further, in the new position, the whole grid can be rotated around its axis, to shift the Prime Meridian to a desired reference location.  These operations need to be done using 3D spherical geometry.  This can be done accurately with modern computers, software tools and the accurate digital mapping that’s now readily available.  It would be extremely difficult to do this with 2D flat maps. 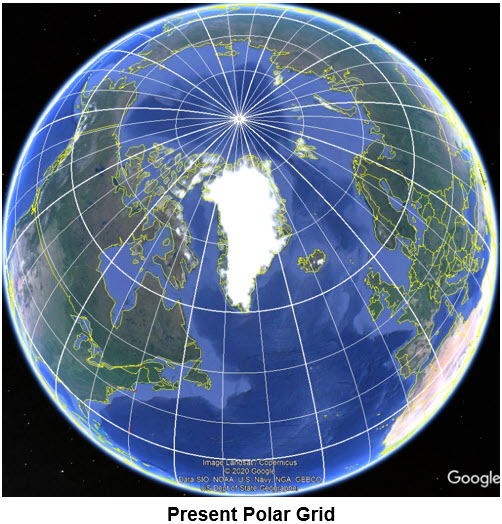 This is an obvious candidate for an earlier grid equator.  The corresponding North Pole is in southern Alaska.  The Prime Meridian is set at Giza, Egypt.  This literally place Giza at the centre of the earth.

The grid is illustrated, in blue, the diagrams over.  This polar grid has been discussed in greater detail in a document – ‘Planetary Grid Alignments – 2014’.

There’s another North Pole position given somewhat further east from the Alaska Pole above, in the book – ‘Atlantis Blueprint’ by Colin Wilson and Rand Flem-Ath.  This Pole position is in Yukon, Canada and has grid coordinates – 63.0N & 135.0W.

This grid is illustrated, in yellow, in the diagrams over.  The Prime Meridian has been aligned to pass through Giza.  But in this case the grid equator runs some 4⁰ south of Giza, i.e. the equator is not exactly aligned with Giza.

There’s another North Pole position given in the book – ‘Atlantis Blueprint’ by Colin Wilson and Rand Flem-Ath.  This is in Hudson Bay, Canada and has grid coordinates – 60.0N & 83.0W.

This grid is illustrated, in green, in the diagrams over.  The Prime Meridian has again been aligned to pass through Giza.  But in this case the grid equator runs some 15⁰ south of Giza, i.e. it doesn’t align with Giza.

Different pole positions in earlier times implies pole shift.  What can cause this?  There are two aspects.

The most important factor is the orientation of the planet’s rotation axis relative to the rest of the solar system and more particularly the sun.  This is determined by the angle (declination) between earth’s axis and its orbit around the sun.  From our perspective, this defines the path of the sun through our sky, i.e. the ecliptic plane.

At present there is a tilt or declination angle of 23.4⁰.  This angle is varying slowly through a cycle of a few degrees over a period of about 25,000 years, i.e. the precession of the equinoxes.  Apart from this oscillation, this axis alignment appears to have been relatively stable over a long period of time.  To shift it would require moving the whole mass of the earth.  This would need a lot of energy.  It would need to be associated with major planetary events, such as large body collisions or intrusions from outside the known solar system.

An additional and more relevant factor is that the earth’s surface or crust is floating on a sea of boiling magma and can move independently of the inner core and a lot of the inner content of the planet.  So, the crust can rotate without greatly affecting the general tilt of the planet as a whole.  It’s a bit like twisting a sock on one’s foot without moving the foot.

This still takes energy, but not as much as moving the whole planet.  Where can such energy come from?  It could obviously come from a glancing blow or collision with a comet, large meteor, wandering moon or planetary fragment.  It could also come from scalar infusions of inter-dimensional energies, i.e. energy grid events.

In addition to a global crust movement, there can be localised movement of individual land (tectonic) plates.  This occurs on an ongoing basis, driven by magma currents within the earth, as plates move apart, causing fissures, collide or slide past each other, in a grating motion.  This causes the normal earthquake and volcanic activity we experience on the planet.  We can also have vertical crust movement.  Parts can collapse and sink beneath the oceans or planetary surface.  Other parts can be driven upward to create new land, mountain ranges and so on.  The crust is quite dynamic.  There can be sudden major events and regular ongoing land movement, over long periods of time.

Looking at the various polar positions mentioned, we can see that the Alaska and Yukon Poles are closely related.  They are in the same general region and the pole can have moved around the area over time.  It’s also possible that the land could have moved relative the pole position.

The Alaska polar grid has strong energy grid alignments along its equator, as mentioned previously. 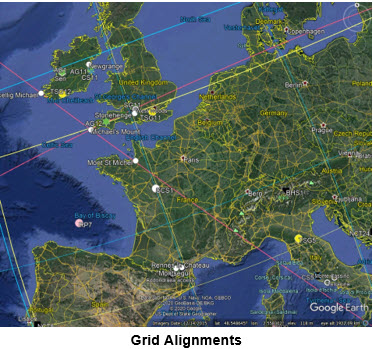 The Yukon polar grid sacrifices this to a degree but achieves good alignment with UK grids.  This is illustrated in the diagram above.  The Michael-Mary Line is shown in pink.  The Alaska 30⁰N Parallel is shown in blue and the equivalent Yukon 30⁰N Parallel in yellow.  We can see that the Michael-Mary Line is reasonably parallel to both Parallels, in the region of the grid sites.  But it has more direct alignment with the yellow Yukon Parallel.

It’s interesting to note also that the eastern UK coastline is approximately parallel to the meridians for the Alaska and Yukon grids in this region.  It can be the case that both grids can have been right at different times and that both sets of grid sites relate to different periods.  It can also be the case that differences between plate movements can have pulled the Giza & UK grid sites out of 30⁰ alignment over time.

Once mapping information is created, it can be displayed in a wide range of mapping software.  Google Earth, for example, is an excellent mapping tool.  It’s easier to get an overview of the whole planet by unfolding the surface onto a flat map, as shown in the diagrams below.  Here we can see the complexity of this type of mapping data in 2D.  There are many software mapping (GIS – Geographic Information System) tools available nowadays.  The following is an excellent Open Source GIS tool that is readily available and widely used – https://qgis.org/en/site/   It is, however, technical software with a bit of a learning curve.

A number of grid site correspondences are indicated with red circles in the diagram above.  More can be discovered with more detailed inspection and with study of the other polar grids.  The Yukon and Hudson Bay Pole Grids are illustrated in the following diagrams.  Again, there are grid site alignments, but not so many as for the Alaska Pole grid.

A possible sequence may be that the Alaska Pole represents an earlier pole position.  There may have been some movement towards the Yukon Pole, then towards the Hudson Bay position and latterly towards the current polar position. 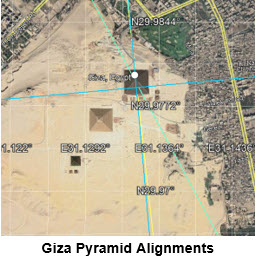 The magnetic poles are moving continuously.  Annual positions for the magnetic North Pole over past 400+ years are illustrated, in violet, in the following diagram.  The last position towards the lower right is the estimated location in 2025.  2020 is the fifth position back from this. 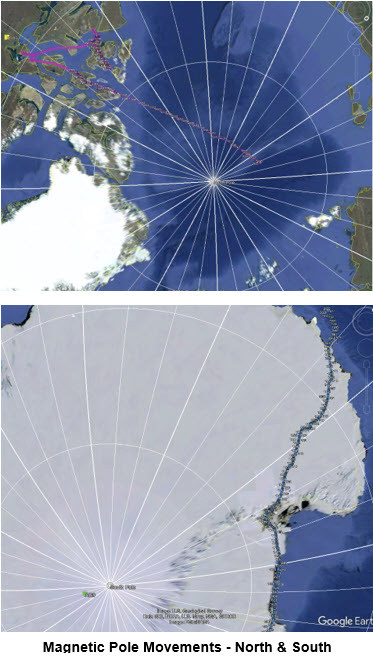 Equivalent annual movement for the magnetic South Pole is illustrated, in blue, in the second diagram over.  The estimated position for 2025 is shown in the upper right corner.  The 2020 location is five positions back.  Here the magnetic pole is quite distant, about 26⁰, from the geographic pole and is moving steadily further away.  There is an asymmetry between the magnetic poles.  The North and South magnetic poles aren’t opposite each other on the globe.

Varying grid pole positions have implications for the present grid site maps.  For example, the horizontal Ley and vertical Axi-A-Tonal lines passing through the Star Gate (SG) sites are aligned with the Parallels and Meridians, as determined by the current geographic pole positions.  These are illustrated in the following map diagram.  Likewise, the Cue Site grid lines (not shown) run through their Cue Sites (CS) at 45⁰ to these other lines. 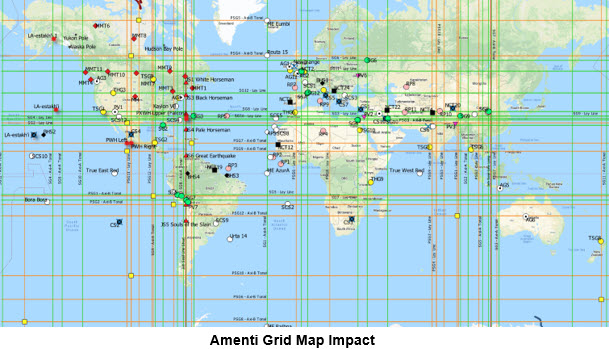 For other geographic pole positions, we will have different Parallels and Meridians, as illustrated earlier.  In principle, the corresponding Ley, Axi-A-Tonal and Cue Site lines would need to be realigned with these.  This would give us different grid site relationships.

The mapped grid lines follow ideal geometric alignments, at a global level.  In practice, grid lines on the ground will meander around, following local geography, ground composition, mineral and crystal presence, underground water flows and so on.  These are best traced by sensing, such as dowsing and so on.

Also, it needs to be noted that the present Amenti Grid map shows the vertical grid lines running between the poles.  In practice, on a globe, grid lines don’t terminate at poles.  They continue to form closed circles around the globe.  So, the vertical Axi-A-Tonal lines, for example need to continue past the poles with a circular loop on the opposite side of the earth.  This will show on a flat map as a second vertical line, 180⁰ away from the original line and grid site.  These complementary vertical lines need to be added to the existing Amenti Map, for completeness. This would double up on the number of vertical lines.